Online sales up in December – but retail spending across all channels down on November
https://internetretailing.net/industry/online-sales-up-in-december–but-retail-spending-across-all-channels-down-on-november-20823
“…[A] greater proportion of non-food spending took place online in December than in November, and spending was up online on both an annual and monthly comparison, according to the Office for National Statistics’ Retail sales report for December 2019.”

Mobile drove global ecommerce in 2019 – and is going to dominate 2020, study says
https://internetretailing.net/mobile-theme/mobile-drove-global-ecommerce-in-2019–and-is-going-to-dominate-2020-study-says-20815
“So finds mobile data and analytics company App Annie in its The State of Mobile 2020 annual report. In fact, $38.4 billion was spent on Alibaba’s Singles’ Day on mobile in 2019, while £33.1 billion was spent in the US on mobile in November and December.”

UK retail failed this Christmas, but globally online grew 8% driven by mobile, study shows
https://internetretailing.net/peak/uk-retail-failed-this-christmas-but-globally-online-grew-8-driven-by-mobile-study-shows-20812
“While UK retail may have taken a hit over the festive season, new research from Salesforce reveals that digital sales across the festive season actually grew 8% to $723 billion globally, driven by mobile.”

More retailers are expecting negative Brexit impacts over next five years than those anticipating benefits, IRX survey reveals
https://internetretailing.net/industry/more-retailers-are-expecting-negative-brexit-impacts-over-next-five-years-than-those-anticipating-benefits-irx-survey-reveals-20811
“More than 36% of retailers think that leaving the EU at the end of this month will have mostly negative effects on their business over the next five years.”

Google January 2020 core update almost done rolling out
https://searchengineland.com/google-january-2020-core-update-almost-done-rolling-out-327669
“Check your analytics and rankings to see how this latest core update impacted you or your clients.”

The Biggest SEO Mistake Content Marketers Make
https://contently.com/2020/01/17/biggest-seo-mistake-content-marketing/
“In 2020, this is what matters. Traditional keyword stuffing is now terrible for your SEO.”

LinkedIn Pages adds tools to help businesses connect with users in more personal and interactive ways
https://marketingland.com/linkedin-pages-adds-tools-to-help-businesses-connect-with-users-in-more-personal-and-interactive-ways-274411
“New features include the option to Invite connections to follow a managed Page, the ability to stream LinkedIn Live from Pages, and new posting options.”

How to Master YouTube SEO, in 10 Easy Steps
https://contently.com/2020/01/16/how-to-master-youtube-seo-in-10-easy-steps/
“Most marketers invest in optimizing their website SEO, but they miss the massive opportunity to rank their video content on YouTube. YouTube SEO may seem complicated, but if you’ve ever Googled how to do something mundane, you likely already understand it.”

Why harmonic retail succeeds where omnichannel fails
https://www.retailcustomerexperience.com/blogs/why-harmonic-retail-succeeds-where-omnichannel-fails/
“As shopper journeys evolve, retailers are finding that the omnichannel strategies they worked hard to implement are no longer effective. At the heart of this upheaval sits one small stat: 0.6% — the current annual population growth rate in the U.S. and the lowest growth rate registered since 1937.”

7 retail trends in 2020 and tips for success
https://www.retailcustomerexperience.com/blogs/7-retail-trends-in-2020-and-tips-for-success/
“While 2019 was a year of big changes in retail, 2020 will bring even more exciting innovation. Retailers who embrace new technology, deeply explore, understand and leverage consumer behavior, and test new concepts will win. So, what’s in store?”

Online sales up but it is still ‘worst year on record’ for retail, warns downbeat post-peak BRC assessment
https://internetretailing.net/industry/online-sales-up-but-it-is-still-worst-year-on-record-for-retail-warns-downbeat-post-peak-brc-assessment-20777
“Assessment of the retail market in the UK for 2019 makes grim reading: total sales for 2019 decreased by 0.1%, compared with a 1.2% growth in 2018, making it the worst year on record, says the British Retail Consortium (BRC).”

Consumer spending grows just 1% in December as rise in consumer confidence fails to boost festive spending
https://internetretailing.net/industry/consumer-spending-grows-just-1-in-december-as-rise-in-consumer-confidence-fails-to-boost-festive-spending-20779
“Data from Barclaycard, which sees nearly half of the nation’s credit and debit card transactions, reveals that spending on essentials declined 0.9% in December, with supermarkets contracting by 0.9% compared with December 2018. Petrol expenditure also fell by 0.5%.”

Store automation could help save the high street, says new report
https://internetretailing.net/themes/store-automation-could-help-save-the-high-street-says-new-report-20792
“Automating physical stores could resolve some of the biggest customer frustrations with the channel while cutting costs for retailers, according to a Capgemini report.”

Yelp cracks down on ‘review rings’ as Google continues to see widespread mapspam
https://searchengineland.com/yelp-cracks-down-on-review-rings-as-google-continues-to-see-widespread-mapspam-327432
“Will the problem of fake listings and reviews destroy trust in major platforms?”

WWD: Amazon to sell luxury fashion
https://www.retaildive.com/news/wwd-amazon-to-sell-luxury-fashion/570199/
“Amazon is planning a luxury apparel platform — to be introduced first in the U.S. and then expanded internationally — and is already working with 12 unnamed brands, according to a report from Women’s Wear Daily citing unnamed industry sources.”

Amazon is said to be preparing a luxury fashion platform
https://qz.com/1781553/amazon-said-to-be-launching-new-luxury-fashion-platform/
“In the first half of 2020, Amazon plans to launch its own digital platform for luxury fashion, according to WWD, a fashion trade publication.”

Ikea ends US sales on Amazon
https://www.retaildive.com/news/ikea-ends-us-sales-on-amazon/569790/
“Ikea has decided to stop selling on Amazon after a U.S. pilot to sell its Smart Lighting products, launched in 2018, ended, a spokesperson with Ingka Group, the retailer’s parent company, confirmed to Retail Dive.”

Social media 2020: The top features, formats and trends to get familiar with this year
https://marketingland.com/social-media-2020-the-top-features-formats-and-trends-to-get-familiar-with-this-year-273367
“Video, machine learning, and shoppable posts are among the top trends to look out for in 2020.”

Opinion: The 2010s, the decade when retailers started to listen
https://www.retail-week.com/customer/opinion-the-2010s-the-decade-when-retailers-started-to-listen/7033854.article
“The last decade saw many famous retailers go out of business. Names that we grew up with are no longer with us.”

Roughly 1 in 4 U.S. adults now owns a smart speaker, according to new report
https://marketingland.com/roughly-1-in-4-u-s-adults-now-owns-a-smart-speaker-according-to-new-report-273994
“It estimates there are now 157 million of these devices in American homes.”

Content Marketing 2020: 7 Tips for Creating Content Your Audience Actually Likes
https://contently.com/2020/01/08/content-marketing-2020-tips/
“Instead, we focused on data and insights that you can easily use to create more effective content.” 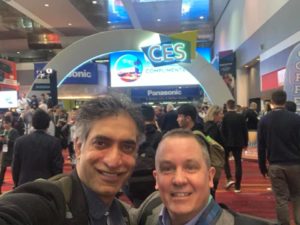 As rewarding as our work is, it’s nice to get out of the office now and then. It’s even sweeter when your destination is Las Vegas, NV for CES 2020!

Our CEO Satish and CTO Rich are currently working their way through all the new technology on display on the CES show floor, in-between meetings with clients and friends, both new and old. If you’d like a chat with us about the content problems your brand faces, or to find out more about our service, please don’t hesitate to contact us.

We’d love to meet you, even if only to compare our daily step count totals!

How cross-channel retail spending, discounting – and returns – played out this Christmas

In today’s peak 2019 round-up we focus on how shoppers bought over Christmas week 2019, on how far retailers discounted – and on expected levels of returns.

Reliance Industries said it had been inviting people to sign up to its grocery delivery service JioMart, which offers “free and express delivery” on 50,000 grocery products to shoppers in the Navi Mumbai, Thane and Kalyan regions.

Throughout 2019 the online retailer has piled billions of dollars into its Amazon Logistics delivery arm, attempting to remove its reliance on third party companies like FedEx and UPS.

We’re running a series of predictions about how the ecommerce and multichannel retail industry will develop in 2020 and beyond. Today we’re focusing on how the way shoppers buy is set to change

Today consumers expect more from the brands they shop with than ever before, demanding convenience, personalised experience and quality products and services.

Going beyond discounts: how technology can help retailers keep customers happy all year round

Recent research highlights that 90% of UK shoppers buy from a combination of retailers, brands and online marketplaces. Shoppers are moving targets, jumping across physical and digital destinations as they browse, purchase and request service and support. For retailers, pinpointing the demands of their customers is increasingly challenging.

What impact will voice search have on SEO in 2020?

With every year seeing new technological developments that shift the boundaries of business, working to take advantage of the new opportunities can be a challenge in digital marketing.

For online buyers who can’t physically touch merchandise, 3D and AR helps them pick the right items and  eliminates uncertainty. By meeting expectations the first time around, sellers can boost confidence in their brand.

Only a few things in life are constant and reliable (namely death, taxes, and endless saga of Brexit). Everything else is in a state of flux or entropy. Degrading and reforming and morphing into unrecognisable forms, leaving us anxiously adrift without an existential foundation to call our own.

Vendor Central is no exception.

As mighty as Amazon’s current power may be, the tides of change wash over them just easily as they dampened King Canute’s ankle socks. Last week saw the latest iteration of VC drag itself free of its chrysalid and cast its predecessor into the Chasm of Forgotten Retail Tools.

GONE are the generous, responsive full-page-width modules that stretched your images to the point where you could see each individual fibre of electronic papyrus they were printed on.

REPLACED by a more logical 1:1 rendering of each slot, allowing you to get a sense of how each module will display without having to follow several steps to the final preview. Practical, yet evoking a sense of melancholic ennui by driving home just how small and cramped the content you spent hours refining is presented.

GONE are the nights where you jolt awake in sweat-stained sheets, crying out with the terrible realisation that your A+ is insufficiently branded.

REPLACED by the calm sensation and lowered blood pressure that comes with having a brand banner at the top of your A+. Or in the middle. Or 2/3rd of the way down, because you’re quirky like that.

GONE is the ridiculous notion that you should only see the modules that are available to work with!

REPLACED by a cornucopia of greyed-out premium modules and softlines options. As if a shop assistant in a posh clothing store has appraised your current sense of style and raised a single eyebrow to declare these outfits are “not for the likes of you”. As if Jeff Bezos was the host for the reincarnated soul of Jim Bowen, offering a reassuring arm across your shoulders as he implores you to “Look what you could’ve won” while an anthropomorphised bull prances next to a carousel of marketing packages.

GONE is the absence of broken UI elements, nonsensically declaring “This module has reached maximum usage in this template”.

REPLACED by broken UI elements, nonsensically declaring “This module has reached maximum usage in this template”.

Like all VC changes, this too shall pass. Given the… more eccentric elements of this release, there is every likelihood that this version was a delicate butterfly, released from the cocoon too early, doomed to wither in the harsh conditions of the run-in to peak trading. But rest assured, you can always rely on Digishare* to keep you abreast of all the changes and developments Amazon can throw at you.

*Unless we decide to drop the whole “retail” thing, and pivot into becoming a cricketing blog. Roughly 37% probability at this stage.