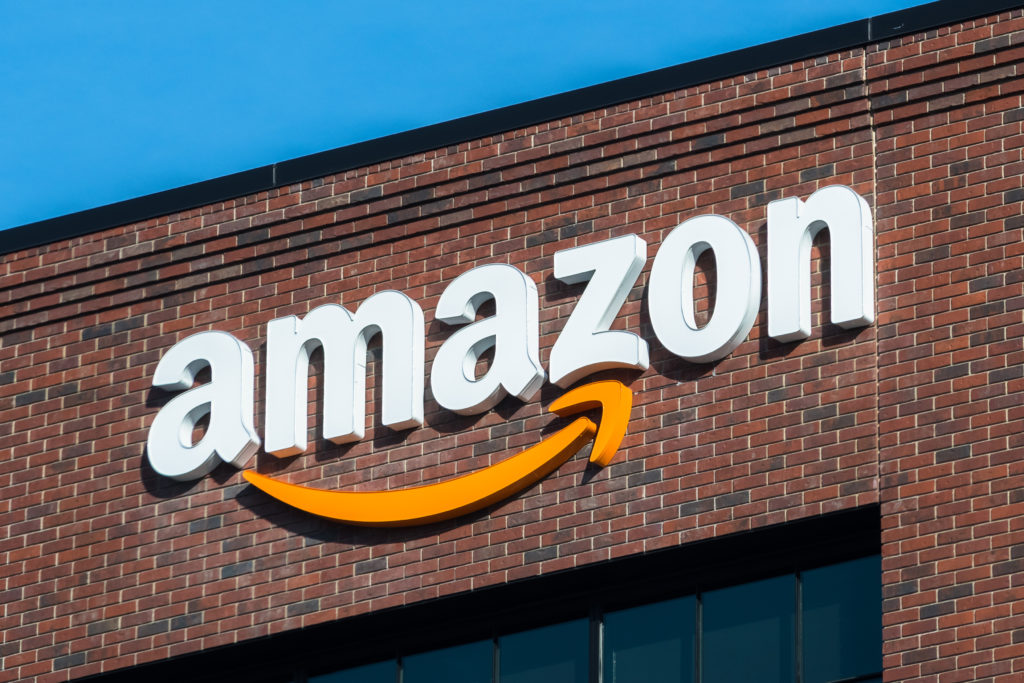 It is with an almost wistful inevitability that we bring news that Amazon’s international growth has blown past that of a different entity. But, in a novel twist, the competing entity is Amazon’s own US retail business.

Despite having a much longer-established business in the US than any other market, Amazon has never struggled to find growth at home. Traditionally, American sales have outpaced all its international iterations combined. While it’s still true that the value of international sales is still less than half of those from the US, international growth has surged ahead. As reported by Quartz, Amazon is experiencing 60% growth overseas, compared to just 40% at home.

The reasons for this are many and varied. After a long time of investing heavily in key markets, Amazon has taken a more fearless approach to opening new marketplaces in recent years. The established European markets turned enthusiastically to Amazon’s services during strict lockdown measures, while heavy investment in India is starting to show results.

Prime Day in 2020 was a strange affair. Despite the COVID-19 pandemic proving to be especially lucrative for the retailer, the logistical strain of the virus caused Amazon to push the event back from its usual July slot to much later in the year. When the event finally went ahead in October, it bunched up awkwardly against other shopping events such as Black Friday and the run-up to the holiday season.

For 2021, Amazon is trying to do things differently. According to a report from CNBC, Prime day in the US is scheduled for sometime in June, a period which has traditionally been slower for retailers.

While Amazon is once again trying to space its shopping events throughout the year, the report does suggest that a secondary reason for the move is to prevent unfavourable earnings comparison with Amazon’s bumper pandemic year. During the lockdown months of last spring, Amazon’s revenues soared. By moving Prime Day a little earlier in the year, Amazon may be hoping that there isn’t as much of a gulf between last years Q2 results and those for 2021.

As with the reports around Prime Day last year, the focus is primarily on the US date. Prime Day has previously launched with staggered timing in different countries, so we will keep you updated as these dates are confirmed in the coming months.

The end of an era, or business as usual? Whatever the future may bring, it’s hard to disagree that Jeff Bezos is stepping down as chief executive at the height of Amazon’s powers. Pick a metric.

In Q4 Amazon easily blew past the $100bn mark, registering $125.56bn in earnings for the quarter, up 44% on 2019 non-pandemic peak. Even with Covid-19 costs of around $4bn a quarter, Amazon was already well-positioned to exploit the global pandemic. There have been hiccups and disruptions along the way, but many of Amazon’s rivals have suffered far worse.

Surely, the bottom line must’ve suffered due to these costs? Definitely, but it didn’t stop another record results year, with 2020 profits registering $24bn. These profits continue to be reinvested in the company, helping to build the infrastructure and technologies that have placed Amazon in such a dominant position.

The UK currently has an e-commerce growth rate of 34.7%, and Amazon is sitting comfortably with a 30% share that continues to increase. Traffic numbers are high, with Amazon the most prominent retail destination. And while mobile commerce growth may be driven by social shopping, Amazon is proving itself no slouch. With 41 million downloads in 2020, it has comfortably the #1 most-downloaded shopping app worldwide.

Bezos hands his successor, Andy Jassy, a company in the best shape of its 26-year existence. But the former head of Amazon’s Web Services will still have significant challenges ahead.

Amazon’s public reputation continues to accumulate tarnish year after year. Despite being the UK’s favourite shopping brand, there are suggestions that this is driven almost entirely by the necessity and the convenience it provides. Surveys report that only a minority feel a genuine connection with the brand. Despite overwhelming success, Amazon’s 2020 has been dogged by controversy, scrutiny and action against it by regulators both in the US and abroad.

Continued criticism about the conditions faced by its workers has been brought into even sharper focus by the company’s ‘severe’ opposition to unionisation. The European Commission has already uncovered evidence that Amazon has used seller data to its advantage. In the US legislation is being prepared to tackle Amazon’s role as a marketplace used to sell fake and unsafe goods to the public.

Retail concerns continue, and Amazon has struggled in some of the areas it’s looked to for growth. Indeed, before the pandemic, this growth was becoming more difficult to find in its core business. The future may require expensive investment in its entertainment output to encourage customer loyalty in the face of Apple, Disney and Netflix. The growing global influence of China is a reminder that Amazon has yet to corner that market. It may ultimately prove to be the source of rivals or new business practices that threaten it in the future.

Or perhaps the end will come from the inside? There is growing political momentum towards breaking up the tech giants that have dominated the last ten years. Given that the new chief executive comes from AWS, which contributes more than half of Amazon’s operating income, will there be sufficient temptation to perform a separation? Freed from the costs of supporting the retail business, you could argue that AWS would reach even greater heights than it already has. And if that happens, the outlook for retail could be very different indeed. 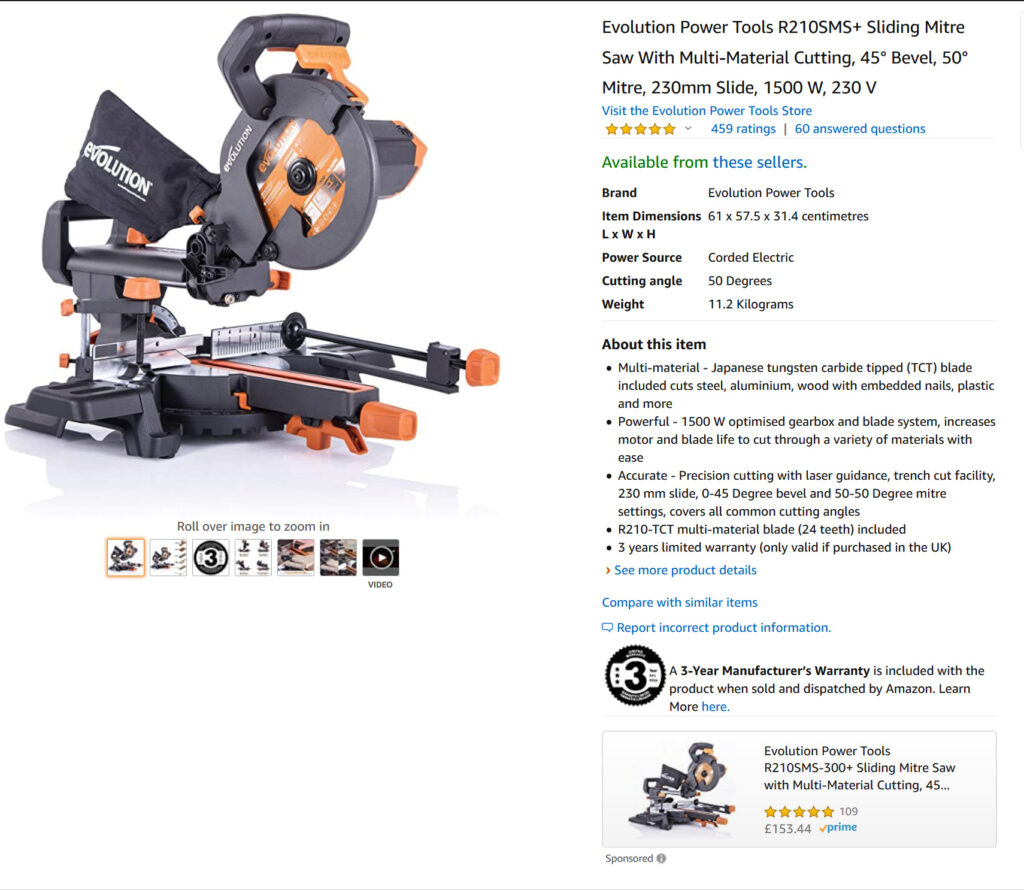 There have been several changes to the Amazon store pages of late, but this one may come as a surprise to those of us who have had content rejected over the years for mentioning guarantees or warranties. On the UK store, it seems like Amazon have created a new way to flag that a product will come with a manufacturer’s warranty if purchased directly from Amazon.

This change has also appeared alongside elements of the detail page highlighting product support available from the manufacturer. This one is especially surprising as it includes external contact information allowing customers to email the manufacturer directly. 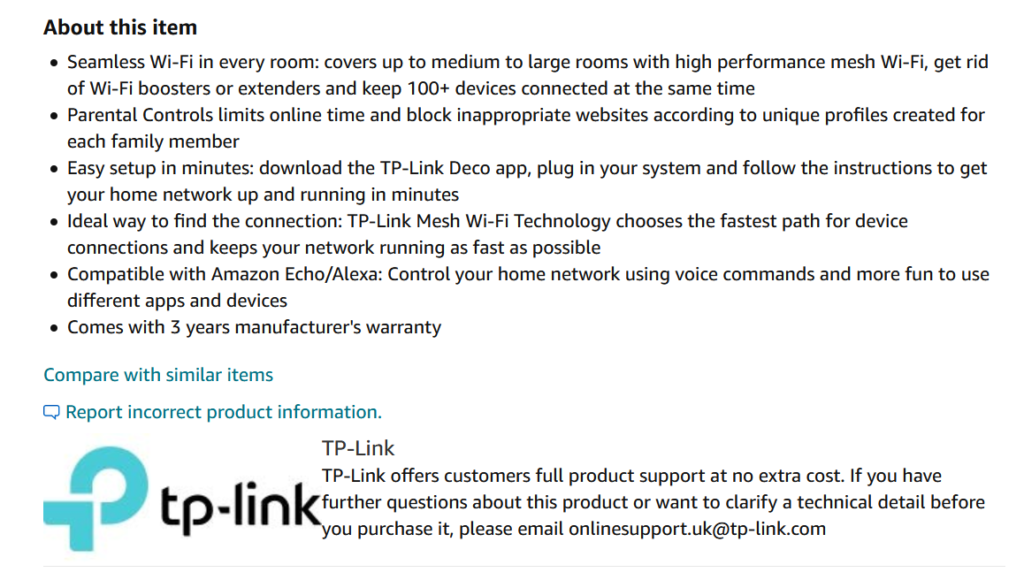 Although we do not know the specifics of how these individual elements have been negotiated, it does seem to fill a need that has been at the top of many brands’ wishlists for multiple years. What do you think about these new elements? Will you be in discussions with Amazon to have them activated on your products? 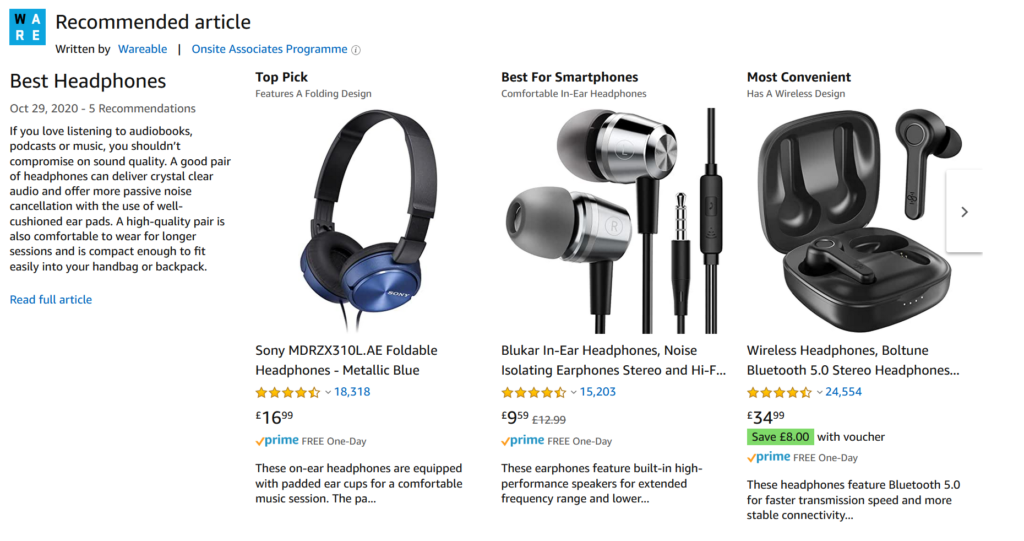 Following on from our report a few months ago, it appears that Amazon’s Online Associates programme has made it to the UK. As previously reported, Amazon has begun to leverage third-party content in the form of article and video reviews to bring the “product research” section of the purchase journey fully onto its own platform.

From the UK example, we can see Amazon deploying buying guides and listicles to relevant searches on its website, highlighting recommended products within a specific widget with review copy alongside. These widgets can be followed to a full review page, but interestingly there’s no sign of this content on the detail pages of the products listed. 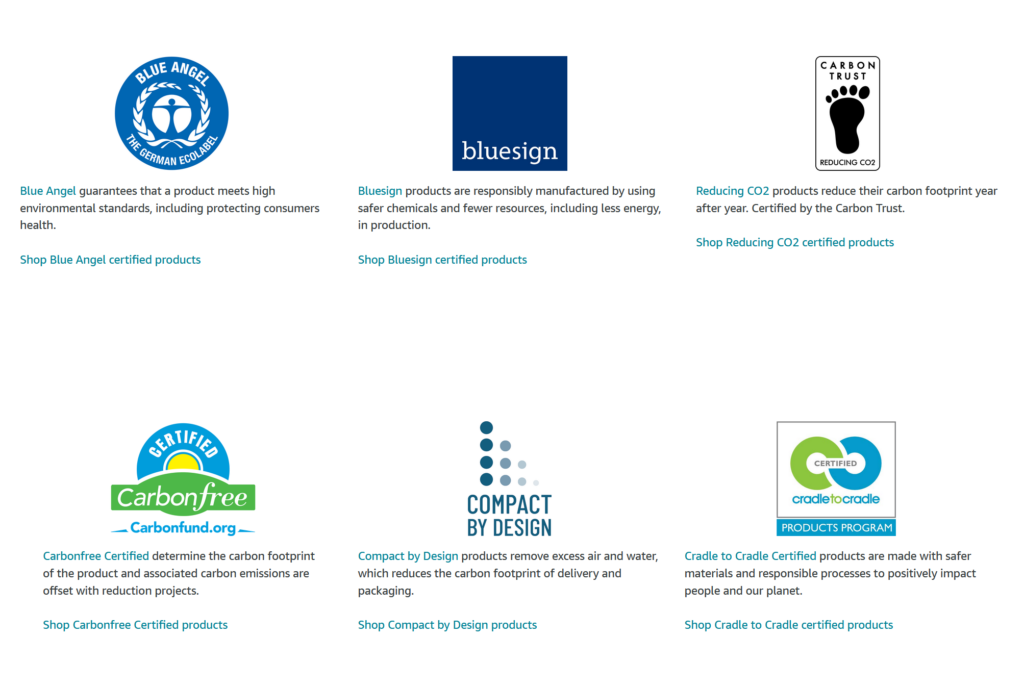 As many of us who interact with Amazon Vendor Central know, in recent years there has been pushback on any claims that a product or service is “eco-friendly”, often resulting in a request to provide the certification to prove these claims. Well, the process has reached a more useful conclusion, with Amazon now showing a “Climate Pledge Friendly” badge next to products that qualify.

The system has been rolled out in the US and across France, Germany, Spain, Italy and the UK, with around 40,000 products being part of the new scheme. To qualify, products must hold one of 18 existing Eco certifications (including the Rainforest Alliance and Responsible Wool Standard), or be part of Amazon’s own Compact by Design. This certification applies to products that “remove excess air and water, which reduces the carbon footprint of delivery and packaging”. 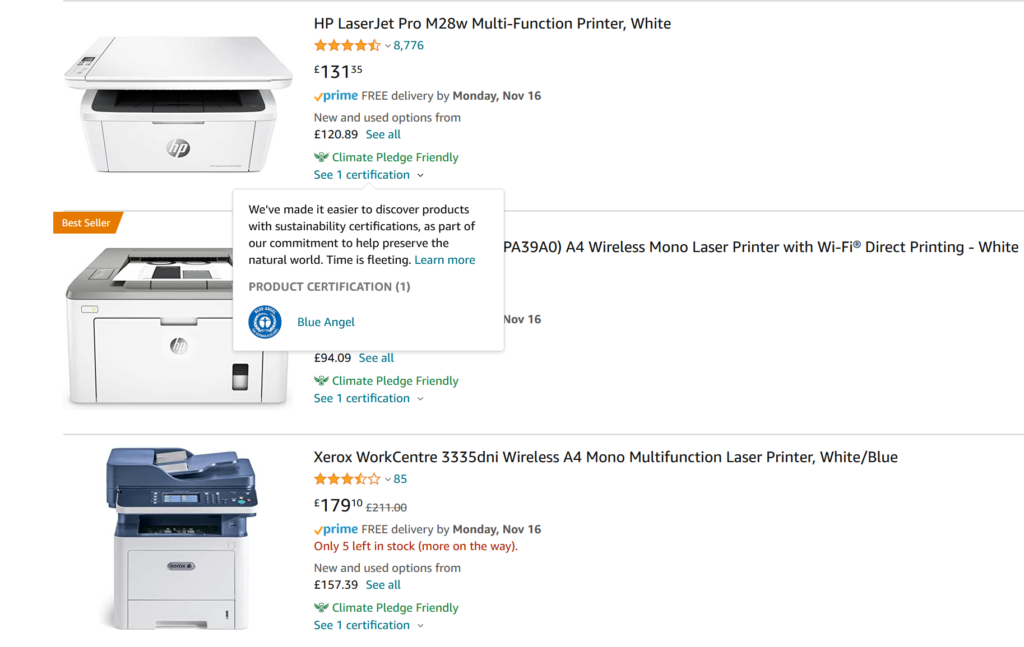 The Climate Pledge Friendly badge appears on both search results and product pages, and can be expanded to show the specific certification that applies.

Currently, only 15 external certifications have products available on the UK site, with the lion’s share coming from Amazon’s Compact by Design. There have also been teething problems, with the launch beset by claims from groups that environmentally-unsound products such as flushable wipes were being given certifications. However, Amazon states that this the beginning of a long process where they plan to range more products and work with more certifications in the future.

With ethical consumerism being a trend that shows no sign of slowing down, the launch of a specialised eco store on Amazon seems like a smart move. However, it appears that the store and products it contains are currently not the easiest to find.